Senator Bellemare and Senator Seidman hosted Women in House ambassadors at a private cocktail reception. We discussed the importance of women in politics and held a Question & Answer session about their incredible careers.

The Senate of Canada reported on the event here.

Ville-Marie—Le Sud-Ouest—Île-des-Sœurs is home to McGill University, and MP Marc Miller graciously welcomed the Women in House Ambassadors to the House on November 21, 2018. Watch here.

A huge thank you to CTV News for inviting coordinator Lana Belber on to their prime time national news broadcast to discuss the program and the adversarial nature of the House as the 2014 trip wrapped up. 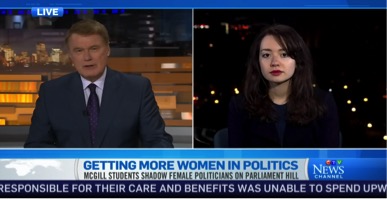 We would like to thank CBC Daybreak Montreal for Having Coordinator Natasha Howell on the show upon our return from our 2014 trip to Ottawa.

On November 20th, 2014, the Speaker of the Senate of Canada rose to welcome several of our participants to the Senate Chamber. We were honoured to be acknowledged and received so warmly.

“Visitors in the Gallery

The Hon. the Speaker: Honourable senators, I wish to draw your attention to the presence in the gallery of a delegation from McGill Women on the Hill, who number among their delegation: Anna Kourilova, Julia McGarry, Busra Karasu, Alexandra Kanters, Lana Belber, Natasha Howell, Jocelyn Micallef, Constance Cordier, Justine Brien, Amy Miller and Pooja [S]en.

Honourable senators, the delegation are the guests of our colleagues Senator Frum and Senator Fraser, as well as other senators.

On behalf of all honourable senators, I welcome you to the Senate of Canada.

The full Hansard report from the Senate debate is available here.

Before our departure, coordinator Lana Belber spoke on Global News as a representative of McGill Women in House in order to participate in the national discussion surrounding the importance of effective harassment policy.

Thank you Dean Christopher Manfredi for the mention on International Women’s day!

During the 2013 trip, TVMcGill and Women in House collaborated to film a series on the program. TVM members accompanied our participants to Ottawa, shot footage of the program, and interviewed speakers for the project. We would like to thank TVMcGill for their support! The completed video may be viewed here.

On November 29, 2013, the Hon. Irwin Cotler rose in the House of Commons to discuss gender parity and Bill C-473, making reference to the 2013 Women in House program. We are very grateful to Mr. Cotler for his continued support for the program and advocacy for gender rights in Canada.

“…I have been inspired by the work of civil society and NGOs in this regard, but most of all, I have been inspired by young people who are leading the call for change. As many members are aware, McGill University held its annual women in House program last week, bringing McGill women students to Parliament to meet with MPs to discuss encouraging more participation among women in public life. I was privileged to participate in a panel, which included representation from all parties, as part of this inspiring gathering. I would like to publicly thank the organizers for their hard work in achieving this year’s event success.”

The full text of Mr. Cotler’s address may be found here.

On Wednesday, November 16, 2011, Mylène Freeman, NDP MP for Argenteuil—Papineau—Mirabel (Québec), and former Women in House coordinator, made a statement on McGill’s Women in House Program!

“Mr. Speaker, today I rise to welcome to Parliament the students participating in McGill’s Women in House program. Women in House has the noble mandate to foster an interest in political involvement in young women with the goal of improving female representation in government.

The Women in House program began in 2001 as an attempt to break down the barriers women face in politics. Tomorrow female MPs and senators will mentor the young women who are sitting in the gallery today. The participants will hear first hand from female politicians about the daily realities of political life. This program makes politics accessible to young women and has inspired past participants, including myself, profoundly.

As a student, I was a participant and a coordinator of Women in Wouse and it motivated me to push the boundaries of what it meant to be a politician. I hope participants will take away from this eye-opening experience the desire to get involved and break down the barriers women face in politics.”

Check out our post! It’s a small compilation of this year’s participant experiences and trip highlights. Our deepest gratitude to the McGill Alumni Association’s Student Sponsorship Program for their continued support!

Thanks for the shout-out, AUS!

Have you checked this out? CBC’s The Link featured Women in House in fall 2010, shortly after our 10th Anniversary Conference. We couldn’t be more proud! Check out the interview here.